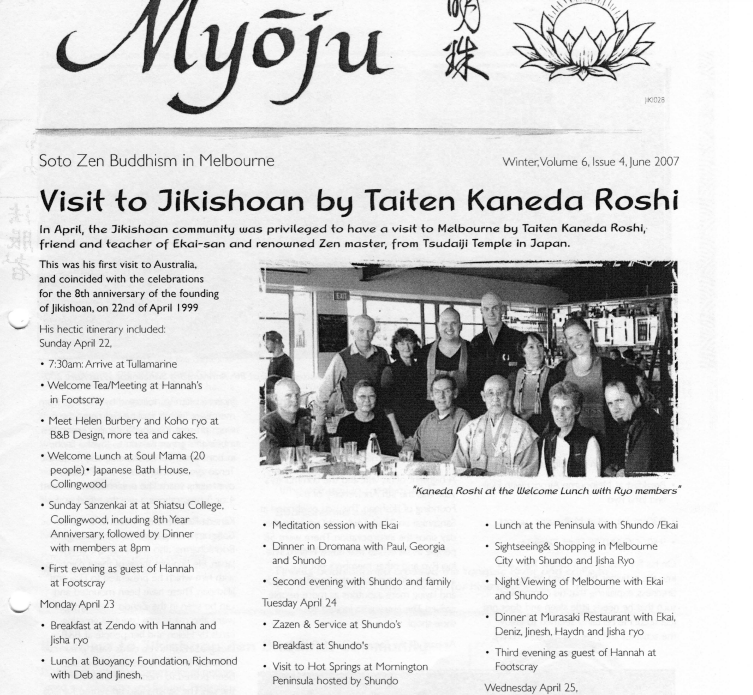 In April, the Jikishoan community was privileged to have a visit to Melbourne by Taiten Kaneda Roshi, friend and teacher of Ekai-san and renowned Zen master, from Tsudaiji Temple in Japan.

On his first day, straight off the flight and into the activities, he showed no sign of tiredness, explaining that his calmness is such that he needs little sleep and does not feel tired! He certainly seemed to enjoy the activities and meeting the community.

During his visits, his hosts were Hanna and the Jisha ryo, while Mark (Shundo) acted as Anja, Kaneda Roshi’s translator and assistant I understand, a major responsibility and commendably carried out. A highlight of his visit, and the community’s year was the 8th anniversary of the Founding of Jikishoan. This was celebrated at Sanzenkai on the 22nd of April, eight years to the day since the incorporation. There were 58 people at Sanzenkai that day, a record. The Ino Ryo and other members put in a sterling effort, moving the partitions back and laying more zabutons as more people arrived. The entry area looked like a shoe-shop!.. (Continued on page 1 and 2.)