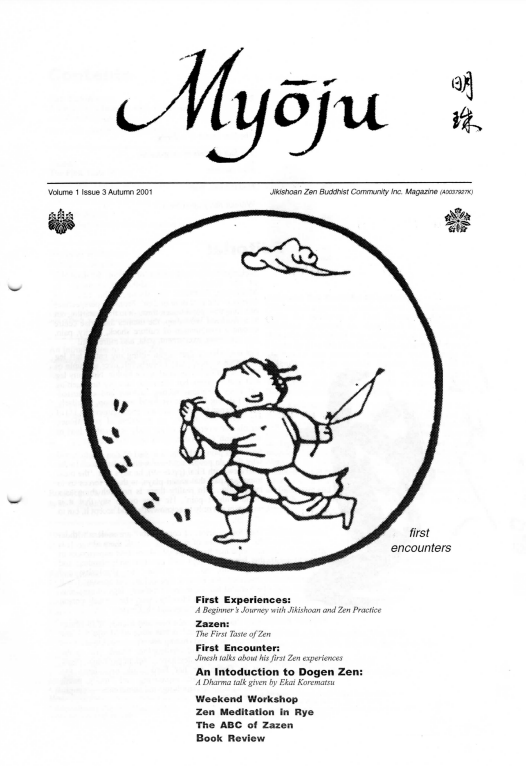 Welcome to the third edition of Myoju, the magazine of the Jikishoan Zen Buddhist Community in Melbourne, Australia. The theme of this edition of Myoju is ‘the first taste of Zen’. From the perspectives of a long time practitioner, through to those starting out at a Weekend Workshop, the themes that arise centre around a combination of culture shock, clarity, pain, joy, confusion, excitement, pain, and more pain!

For me, when I first began sitting my entire left leg would go to sleep, and I nearly fell over a couple of times when I tried to stand up for kinhin. Now, my leg still goes to sleep, but I know to take my time getting up! Lucy mentions feeling ‘aching and exhausted (p.11) during her first weekend workshop. Similarly, Greg listened to the ‘groans and protestations’ (p.11) of his body, and Jinesh, an experienced practitioner, recalls that every part of his body ‘alternately hurt or went numb’ (p.14) during his early experiences.

So why is pain such a built-in part of Zen practice, and why then do people continue with the practice? In the interview with Ekai (pp.6-9), he says that ‘the most important part that zazen plays, is that it forces us to face reality… In reality there is no such thing as a world without pain’. He goes on to say that it is important not only to acknowledge and accept it, but to let it go.

The ‘four chariots of compassion’ are useless without the ‘four horses of suffering’ to pull them along. It is my hope that having people share their experiences in this issue of Myoju will generate understanding and compassion, as we realise our similarity and connectedness. I know that as I sit this Sunday, I will be mindful that mine aren’t the only legs complaining in the room, and on Monday I won’t be the only person at work facing pressures and challenges.

Many thanks to the members and friends of Jikishoan who have contributed to this issue of Myoju. I know that expressing and sharing one’s personal experiences can be difficult and challenging. Thank you to the members of the publications group. In particular, thank you to Karen for her hard work organising the magazine layout, and organising me! Finally, thank you to Ekai for his teaching, and sometimes simply his presence.