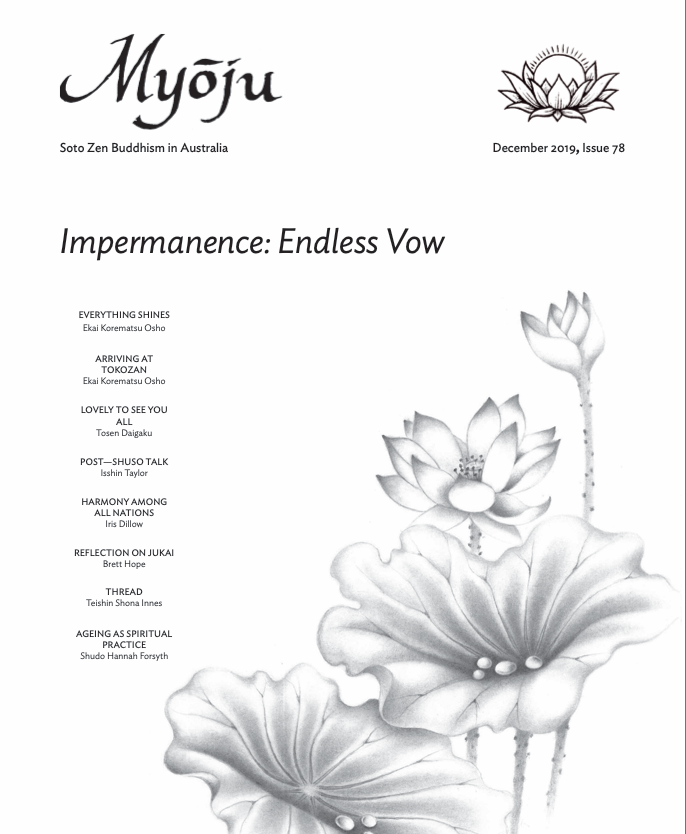 Welcome to the Summer edition of Myoju magazine. This is the final in our series on Impermanence, the focus of this edition being Impermanence – Endless Vow. It also marks the end of a year of training, practice and celebration to mark Jikishoan’s 20th Anniversary.

Ekai Osho’s Dharma talk ‘Everything Shines’ is an extract of a public talk given while he was in the United States in June to celebrate the 40th Anniversary of the Carleton-An- tioch Buddhist Studies programme. ‘Arriving at Tokozan: Jikishoan 20th Anniversary’ has been reprinted with the kind permission of Dharma Eye Magazine.

In September Tosen Daigaku made a brief visit home to Australia. In his talk, ‘Lovely To See You All’ he speaks about his early training with Ekai Osho and Jikishoan, the last two years spent training with Seido Suzuki Roshi at To- shoji Monastery and his plans to commence further train- ing at Daihonzan Eiheji.

Also in September, Rev. Ishhin Taylor gave her Post-Shu- so talk at Sanzenkai and Shudo Hannah Sensei hosted a workshop on ‘Ageing as a Spiritual Practice’ at Shogoin.

In Sangha News, Iris Dillow writes about her recent vis- it to the Japanese Garden in Cowra NSW and one man’s vow to address past actions and bring peace to his small community; and Brett Taiun Hope shares his experience of taking Jukai with Ekai Osho.