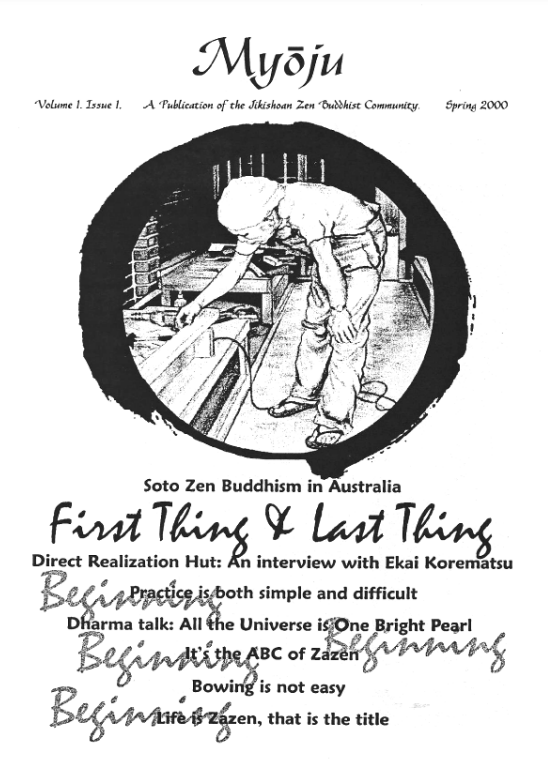 Welcome to the first issue of Myoju, the magazine of the Jikishoan Zen Buddhist Community in Melbourne, Australia. The seeds for this magazine were germinated in the small zendo Ekai Korematsu Osho built in his garage when he came to live in Melbourne in April 1998. The sangha has steadily grown from those attending Orientation and Deepening Practice courses with Ekai, and there is now a solid core of members who practice together regularly at Sunday Sanzenkai, member’s practice meetings, workshops and retreats. An interview with Ekai about the beginning, and the developing structure of Jikishoan begins on page 4.

The theme chosen for this first issue is Beginning. The term “Beginner’s mind” is well known to Zen practitioners, and Ekai emphasises, like Suzuki-Roshi who coined the phrase, the importance of maintaining a beginner’s view in one’s practice. When asked about this theme of Beginning, Ekai said:

The choice of a name for this magazine came from the combined effort of sangha members. The Japanese word Myoju was preferred to its English translation, Bright Pearl, which does not carry the same sense of pearl-like translucency. Ekai’s dharma talk on The Universe is One Bright Pearl on pages 10 and 11 gives insight into this choice.

Many monks and teachers have brought Zen teachings and practices to Australia before, but Ekai is the first Zen monk to come and stay, and to teach purely in the Soto tradition. Jikishoan is the beginning of an Australian branch on the Soto tree, a branch that is deeply nourished by the solid trunk and ancients roots of teachings and practices of the Buddhas and Patriarchs in this lineage, but a branch that is also already developing its own characteristic shape and perfume. In a way reminiscent of how Shunryu Suzuki established Soto Zen in America, Ekai, by his clear and subtle guidance is giving us a sense that something has started that will grow and last.

Congratulations to everyone involved in the beginning of the Jikishoan and of Myoju. Ekai for bringing us the teachgs and practices of Soto Buddhism, Alison for all the newsletters she has previously produced and her contribution to this effort, and all the members and friends of Jikishoan, including the Ballarat Zeno who are giving their best effort to our individual and group practice.