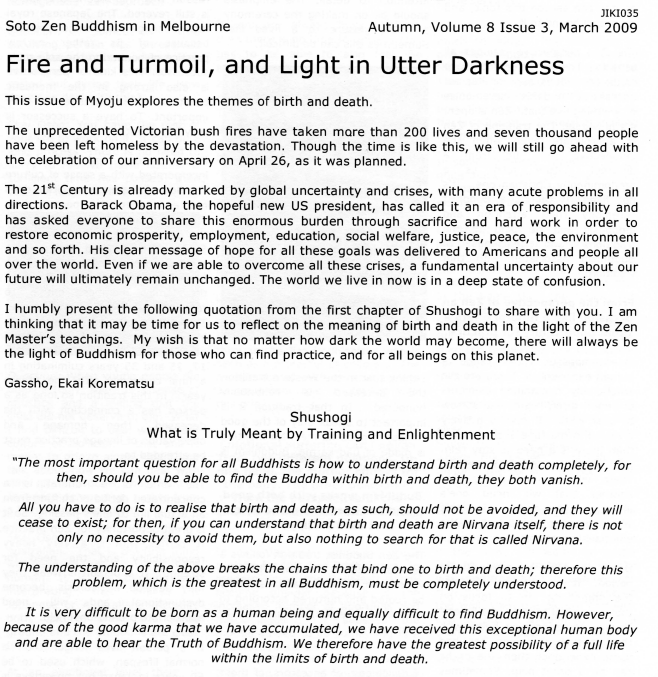 This issue of Myoju explores the themes of birth and death.

The unprecedented Victorian bush fires have taken more than 200 lives and seven thousand people have been left homeless by the devastation. Though the time is like this, we will still go ahead with the celebration of our anniversary on April 26, as it was planned.

The 21st Century is already marked by global uncertainty and crises, with many acute problems in all directions. Barack Obama, the hopeful new US president, has called it an era of responsibility and has asked everyone to share this enormous burden through sacrifice and hard work in order to restore economic prosperity, employment, education, social welfare, justice, peace, the environment and so forth. His clear message of hope for all the goals was delivered to Americans and people all over the world. Even if we are able to overcome all these crises, a fundamental uncertainty about our future will ultimately remain unchanged. The world we live in now is in a deep state of confusion.

I humbly present the following quotation from the first chapter of Shushogi to share with you. I am thinking that it may be time for us to reflect on the meaning of birth and death in light of the Zen Master’s teachings. My wish is that no matter how dark the world may become, there will always be the light of Buddhism for those who can find practice, and for all beings on this planet.

What is Truly Meant by Training and Enlightenment

The most important question for all Buddhists is how to understand birth and death completely for then, should you be able to find the Buddha within birth and death, they both vanish.

All you have to do is realize that birth and death, as such, should not be avoided and they will cease to exist for then, if you can understand that birth and death are Nirvana itself, there is not only no necessity to avoid them but also nothing to search for that is called Nirvana.

The understanding of the above breaks the chains that bind one to birth and death therefore this problem, which is the greatest in all Buddhism, must be completely understood.

It is very difficult to be born as a human being and equally difficult to find Buddhism however, because of the good karma that we have accumulated, we have received the exceptional gift of a human body and are able to hear the Truths of Buddhism.

We therefore have greatest possibility of a full life within the limits of birth and death it would be criminal to waste such an opportunity by leaving this weak life of ours exposed to impermanence through lack of faith and commitment.