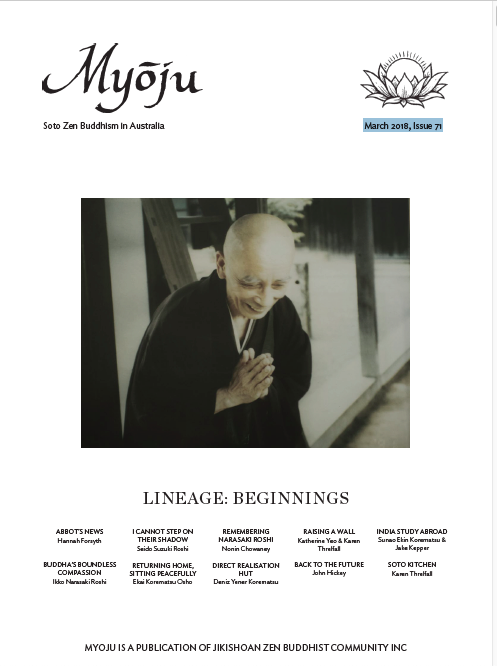 “Even though the ways of ceaseless practice by our founding Ancestors are many, I have given you this one for the present.”

As Jikishoan approaches its 20th anniversary in 2019, this year Myoju will explore our identity as a community through the theme of Lineage. As a young, lay community, practising in a spiritual tradition that originates far beyond our land and culture, we do not do so in isolation. 78 generations of the Soto Zen Buddhist tradition are embodied in the forms of our practice and training, allowing us to experience an inclusivity and belonging that takes us beyond our individual practice.

In this issue, our theme is Lineage – The beginning of the ceaseless lineage in practice. In her recollection of Jikishoan’s very first Sanzenkai, Deniz Yener Korematsu describes the tireless efforts of Ekai Osho to create Jikishoan’s first zendo in the garage of their suburban home. Twenty years later, the community is witnessing that same event again – this time on a much larger scale, with Ekai Osho driving the project with the same effort, selflessness and vision.

Perhaps it might be said that these qualities are the seals of our lineage, indeed of the Bodhisattva ideal; elsewhere in this issue Nonin Chowaney describes how Ikko Narasaki Roshi, the founder of our preceptual lineage, strove to rebuild and re-establish both Zuioji and then Shogoji temples, the later the first to accommodate foreigners within the Soto monastic system. Similarly, Seido Suzuki Roshi recounts the rebuilding of Toshoji, almost from the ground up, which now functions as a training monastery for monks and nuns, that is uniquely open to foreigners and lay practitioners.

Jikishoan is presently engaged in its fifth practice period, an opportunity to cultivate these same qualities as a community, as our Home Temple nears completion and we build a future together.